A network analysis approach to the Syrian dilemma

A chart by The Big Pharaoh doing the rounds of social media shows just how much of a tangled mess the Middle East is. But if we tease it apart, we see that the region is fairly neatly divided into two camps; it's just that one of those camps is divided amongst itself. Deciding which of these internal divisions are fundamental to the peace and which are distractions in the short term may make the diplomatic options very clear.

Max Fisher of The Washington Post published a chart showing the tangled web of love and hate that ensnares the various "meddlers" and "meddlees" in the Middle East. The chart is the work of an Egyptian blogger, The Big Pharaoh, and was inspired by a letter to the Financial Times. The chart looks completely hopeless, or in Fisher's words, "sort of terrifying".

And yes it does, at least until you start teasing it apart step by step. Part of my own research involves analysing the global economy as a network of cities using the tools of social network analysis. While I don't pretend to have any kind of expertise on the Middle East, I decided to convert The Big Pharaoh's chart into a network graph (incorporating the quibbles Fisher noted in his update) to see what's really happening inside it. I also don't pretend to evaluate the truth of the original chart; I offer this simply as an interesting methodological exercise that may be replicated by anyone looking for new ways to analyse complex diplomatic problems.

If we take just the lines of "support", these produce a fairly simple network. The world is divided into two camps — those who side with the Syrian rebels, and those who side with Bashar Assad, with Iran's support for Hamas the only tie that contradicts this general impression: 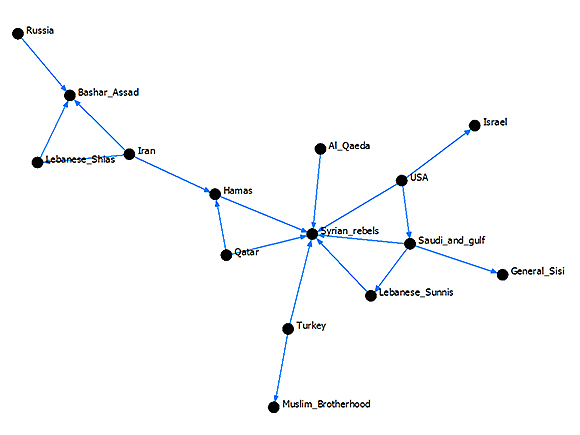 If we take just the lines of "hate", this produces a mess that's very hard to make sense of: 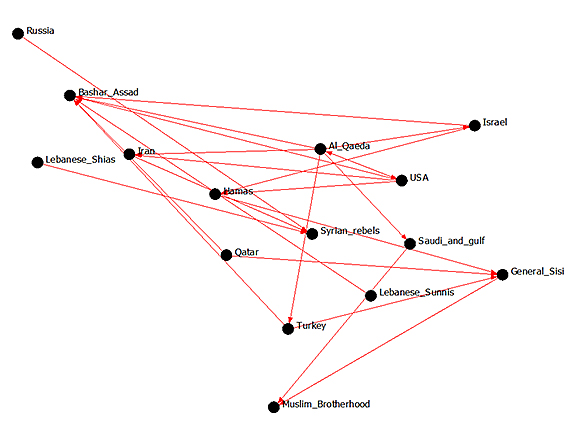 Dwelling on who hates who is just as unproductive in this diagram as it is in real life, so let's look at it another way. Which players may be united by a common enemy? The following graph shows where such alliances may occur: 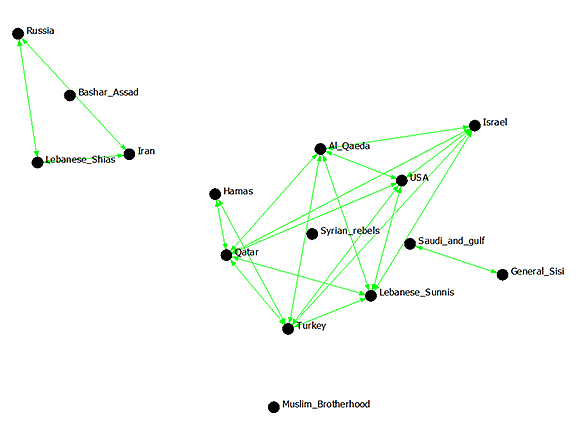 Once again, the world divides neatly into two camps. If we combine the network of support with the network of those who have common enemies, we get what I will call the optimist's graph — the network of all those who might be able to work together in an optimistic world. 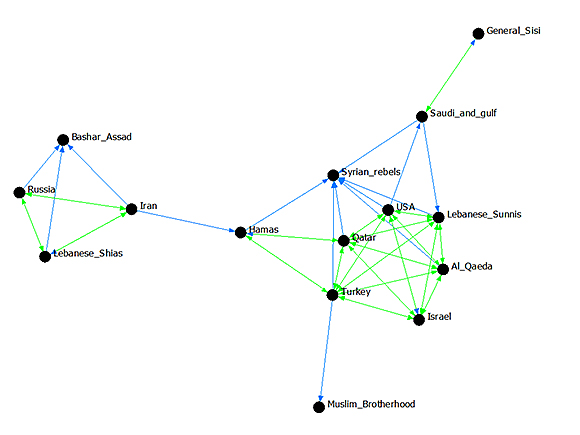 What can we do from this position? If the US decides to pursue a purely military route to remove Assad from power, it will incur the ire of Russia, Iran and Lebanese Shias, but it can do so with a broad base of support including the Syrian rebels themselves, Israel, Qatar, Turkey, Lebanese Sunnis, and even Al Qaeda. However if it chooses a diplomatic route to curry support to remove Assad it must isolate him in the above graph by making an ally out of Russia and/or Iran (assuming that making an ally out of Lebanese Shias would have little impact). Russia doesn't hate the US but it does hate the Syrian rebels, making it an unpromising ally against Assad. Iran hates the Syrian rebels and the US hates Iran, but the Al Qaeda is a thorn in both their sides, making it a potential though unlikely source of cooperation.

But before one can even think of isolating Assad, those who currently back the Syrian rebels must present a united front. It is clear that amongst the hatreds presented here, some of them must simply be taken as diplomatic hazards whereas others present an important challenge to the possibility of standing united. The "hatreds" that must be more or less taken as givens are as follows: 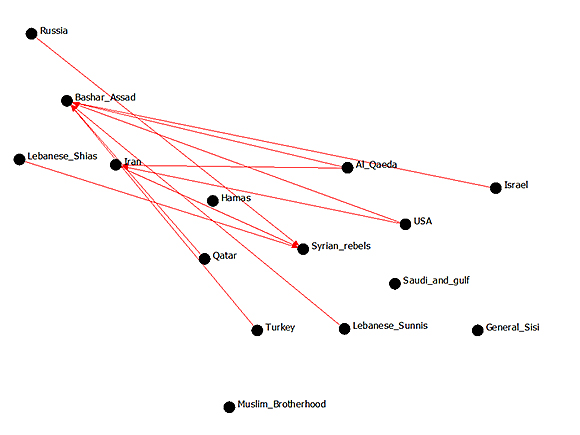 The more important hatreds to focus on are those between members of the Syrian rebel block: 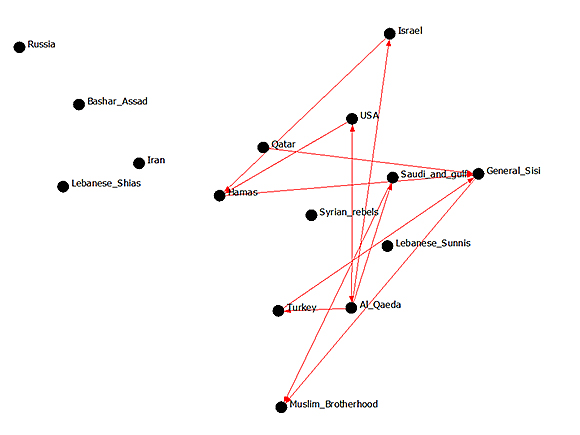 Here we start to see that the headaches are really all on the rebels' side; from Assad's perspective the world is a very simple place, and until his opponents can unite he can do as he pleases.

Three of these hatreds conflict with the possibility of uniting against a common enemy, but these all involve Al Qaeda. It would seem that Al Qaeda holds more value as an enemy than as an ally — better to use it as a way of rallying Iran than attempt to ally with Al Qaeda directly — though this requires destroying Al Qaeda's sympathy for the Syrian rebels.

Four other hatreds involve General Sisi, but our optimist's graph suggests he is an outside player. The Saudi-Muslim Brotherhood hatred is also a peripheral concern. The remaining hatreds — the ones that really ought to be overturned — are the US and Israel's hatred for Hamas. If relationships between Hamas and the US and Israel can be repaired, then the Syrian rebels are backed by a substantially united front. This front will have Hamas as an ally and Al Qaeda as a common enemy, giving it two points of sympathy with Iran; pressure might then be applied on Iran to change sides away from Assad. Here is what that brave new world might look like: 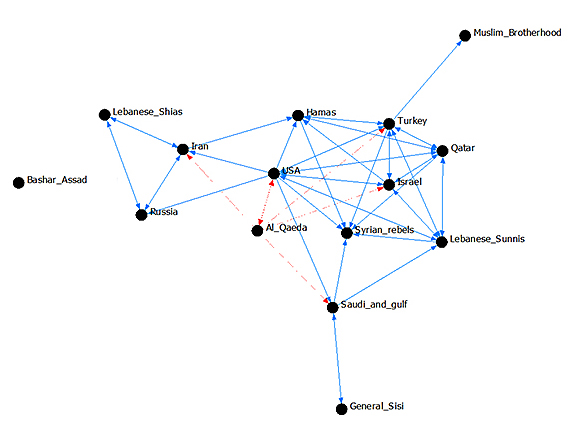 Here then is what the Big Pharaoh's chart tells us: Assad and his allies are united; all of the confusion is on the side of those who support the Syrian rebels. Amongst these internal hatreds, many of these are peripheral to the problem of removing Assad — General Sisi and Al Qaeda in particular are in a sense simple distractions in the short term. The most important challenge is isolating Assad diplomatically, and some of this hinges on restoring ties with Hamas, and finding ways to rally Iran. Though this is merely within the context of this network exercise, which admittedly is about as abstract as any hope for a clean resolution to the problem.

Kerwin Datu is Editor-in-chief of The Global Urbanist.