In this second of three articles, Marcus Tudehope introduces the community and government leaders genuinely committed to helping the residents of San Roque, and the unenviable challenges that confront them.

My host Flora's notoriety as a community organiser means that at any one time she may be acting as advocate and government liaison for any of a dozen different groups of squatters, street vendors and urban poor in Manila. I had the opportunity to attend one of her meetings with the Assistant General Manager (AGM) of the National Housing Authority (NHA), and the council of leaders of a community of squatters.

I learn that this community has recently been granted tenure by the NHA and were now in the process of paying off their lots. The meeting has been requested because these newly elected Councilors allege that their predecessors were shown favouritism and allocated larger parcels of land. We go around the table with each participant stating the size of their lot and whether they were up to date with repayments. Of those present, the biggest lot is 18m², the smallest 9m². The owner of the largest parcel speaks emphatically about someone allocated a parcel of 23m². She says '23' in a scandalous tone, like the number is a blasphemy. The fact that this is only 5m² larger than her own lot is testament to just how valuable space is in Manila.

There's a long exchange before the AGM informs the council that they'll have to pursue their complaint through the court system. He assures them that if they were dealing with a new development on a vacant site there would be equality in the size of land parcels. But as this is an on-site slum upgrade to accommodate all existing residents, some discrepancy is inevitable. The meeting leaves me with the impression that the AGM has genuine concern for the people present and an unenviable job.

A community of squatters so far not so fortunate as to be granted tenure is San Roque. Though still vehemently opposed to relocating, Flora had earlier managed to convince San Roque's Community Council to consider a 'Plan B' should their integration into the new Quezon City CBD be unsuccessful. After some discussion, a bus is commissioned to take the council and ourselves on a tour of the site where the NHA proposes to relocate the community: Montalban, in Rizal Province, outside Metro Manila. 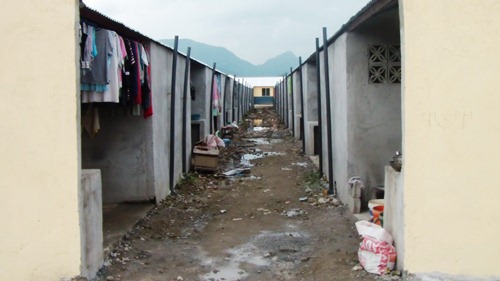 One of Montalban's new streets

We're informed by our NHA guide that the Montalban site is 23 kilometres away. I didn't look at the odometer but with Manila traffic and unsealed roads outside the city limits, it's a journey of about 90 minutes. Approximately 400 identical one-room concrete units have recently been constructed and are arranged in grids over the site. At the moment there is no permanent supply of water and hand-operated pumps have been built at intervals along the main street. 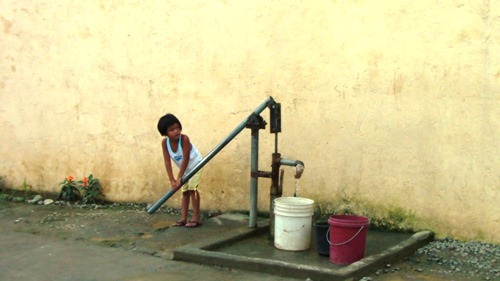 The electricity supply is inconsistent and was off when we arrived, so a dark interior was visible in each of the units through the hole where a door would be. I asked one councilor for his thoughts and he said, "no water, no electricity, no job, no hospital." Our NHA escort who had been looking uncomfortable since I asked the question then told us that there was a hospital "just over the hill." 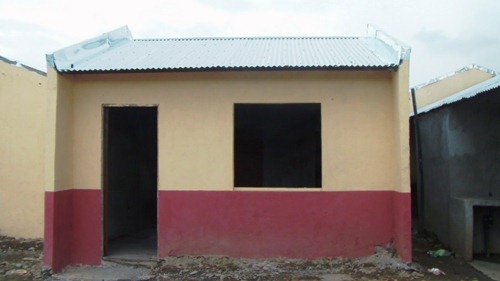 The units proposed to accommodate each family who relocates

A site within Quezon City is a compromise that is much less likely to derail the lives of the San Roque community. When Flora and the community initially put the concept of their inclusion in the new CBD to the NHA, the response was a letter stating that the proposal could not be considered until it was in the appropriate format. The letter then listed a dozen or so items required for a submission: " … Preliminary Feasibility Study, PHILvocs clearance, DENR clearance, BIR Zonal Valuation, Raw Land Appraisal … " The sign off was somewhat facetious — "we look forward to your response" — given it was unlikely anyone in San Roque could identify everything on the list, let alone have the means to compile it all.

To discuss the campaign, we met with the Chairman of the San Roque Community Council, Edwin, at his office, one of the few concrete buildings in the middle of the slum. Edwin has a bubbly effeminate manner, so his downtrodden face and eyes right now don't suit the rest of his demeanour. He tells me that he is due in court after our meeting, as during the clash in September a member of the demolition squad hit him in the face with a brick, breaking his cheekbone. He tells me he spent a month in hospital and is now seeking damages. Edwin talks a lot and it's clear he's very emotional, but he's philosophical about the community's predicament and had some admirably level-headed things to say:

The dichotomy of rich and poor, haves and have-nots is ineluctable in Quezon City. Before our excursion to Montalban I visited the infamous Payatas dumpsite slum, where in 2000 a typhoon had caused a collapse in the landfill, destroying 500 homes and killing 1000 people. Even before the tragedy, more than one official investigation had found the dumpsite to be hazardous and recommended its closure. But its operation is too profitable, and the people here at risk are the have-nots with the very least political cloud.

My guide is the personable Josie, who's been a resident of Payatas for 18 years and wastepicker in the landfill for 10. When we meet at Quezon City Hall, Josie tells me she's never had legal electricity. With her husband working in construction she now has free time, and so has been coming here twice a week for the past year to make the request to the Mayor. On our ride to Payatas I ask her about the garbage slide. She says she was lucky because her home wasn't destroyed, but that the death toll was closer to 2000. Life has been getting more difficult for wastepickers; since government recycling programs have been established, much of the valuable waste is separated at the source. Josie estimates that most wastepickers now earn approximately 25 Pesos (58 US cents) per day.

The effect of Payatas hits the nose first, and I can smell the dumpsite for the last ten minutes of our journey. When the full panorama of the landfill comes into view it resembles something from a movie set after the apocalypse. Densely packed shanties spread off down the slope right up to the base of a mythic-sized mountain of filth that dwarfs everything. Previously I'd had difficulty picturing how garbage could kill people, but at its base, the enormity of the pile and the moving specks of the wastepickers on top look incredibly precarious and it's abundantly clear how the wrong conditions could turn this situation lethal. 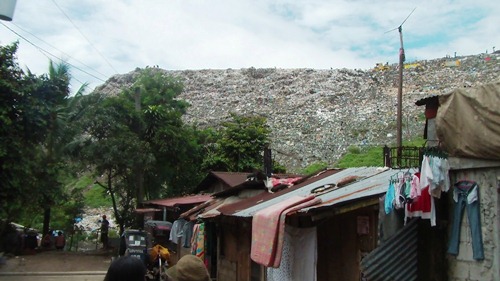 Payatas shanties in the shadow of the landfill; wastepickers are visible as dots on top of the garbage pile

At the edge of the settlement a fence line separates the slum from the landfill itself. The working conditions here are incomparable to anything else I've seen. We pass people squatting and picking through the muck separating out bits of wire and plastic bottle caps. Everything reeks, everything is covered in flies and we're not yet in the dumpsite proper. Josie guides me through with an expert narration explaining which parts of the waste are valuable and which are not. 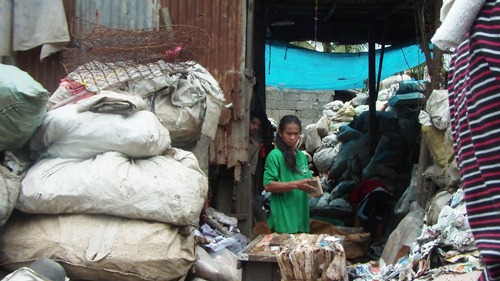 A wastepicker working where the slum borders the landfill

Away from the fence line and deeper into the slum there's a noticeable change in demeanour. In some places the disjointed concrete that serves as a path through the mud has been swept, and it's noticeable that the people who aren't working seem impeccably clean. Josie's tour includes her house, a community centre, a new health centre with a spotless tiled floor, and a primary school. No one in Payatas has security of tenure, yet there is clearly some sense of civic pride here in the shadow of the garbage pile. 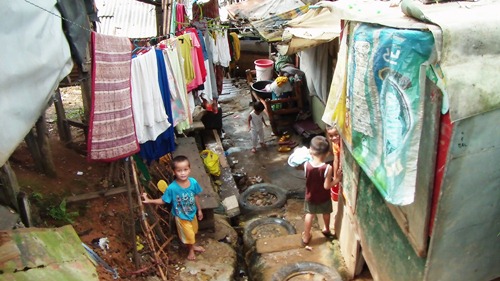 I've understood that vote buying was a fundamental problem eroding genuine democracy in Quezon City. If nothing else the poor here have got the numbers and others can exploit their predicament by offering a very small sum in exchange for a vote. Josie tells me that at the last local election a woman knocked on her offering her 1500 pesos (30 US dollars) if she brought five people with her to vote for her candidate at the polls. Josie refused but was sympathetic with people who didn't. "You are poor and you need to feed your family. You take the money and have solved your problem for that day."

From talking to her its obvious that Josie's genuinely got absolute zero faith in the government and when I mention the NHA her natural smile drops into a look of disgust. It's disheartening to hear her say that she's seen a generation of politicians, civil society groups and aid workers come and go and her situation has improved very little. I want to add economic development projects to her list. Standing in Payatas offers a unique vantage point from which to judge the success of development projects in Quezon City. The scene begs the question: can a project be described as successful if it contributes nothing to improving the circumstances of people like Josie?

Next week, Marcus Tudehope meets the most forgotten of Manila's slum communities, the 'bat people' who live in the dark under highway bridges.